Access our insights, latest research, leadership trends and more through our Knowledge Center.

Progress for Women on Boards Takes a Step Back 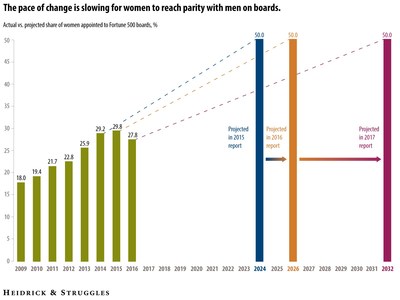 Progress toward gender parity on boards reversed in the past year, ending a seven-year run of gains in the percentage of women among newly appointed directors, according to Heidrick & Struggles' latest Board Monitor.

CHICAGO, June 20, 2017 /PRNewswire/ -- Progress toward gender parity on boards reversed in the past year, ending a seven-year run of gains in the percentage of women among newly appointed directors, according to a new study by Heidrick & Struggles (NASDAQ: HSII), a premier provider of executive search, leadership consulting and culture shaping worldwide.

Heidrick & Struggles' latest Board Monitor study examines the class of independent directors who filled vacant or newly created board seats at Fortune 500 companies in 2016. The study analyzes trends in the data about gender, ethnicity and industry experience, among others.

In 2016, women accounted for 27.8% of new director appointments at Fortune 500 companies, a 2.0 percentage point decline from the previous year. With this new data, the trend now indicates that gender parity among an incoming class of directors will not be achieved until 2032, six years later than the firm's previous extrapolation.

"For some time, Fortune 500 companies had been achieving slow but steady progress increasing the percent of incoming women directors. However, in the past year, we have seen a setback," said Bonnie Gwin, vice chairman and co-managing partner of the global CEO & Board Practice for Heidrick & Struggles.

In 2016, Fortune 500 companies filled 421 vacant or newly created board seats with independent directors, a new high since the inception of Board Monitor in 2009.

"The number of incoming directors has slowly increased over time, providing further opportunity to better diversify boardrooms. So it is disappointing to see that more progress wasn't achieved to move closer to gender parity in corporate boardrooms," added Gwin.

Women accounted for 37% of new board appointees serving on boards for the first time in 2016, nearly 10 percentage points higher than women's share of new appointments overall. "When companies place more value on a candidate's unique set of skills and experiences than on his or her previous board experience, there is more opportunity for women and people from other underrepresented groups to gain greater representation in the boardroom," said Gwin.

Technology companies have long trailed companies in other sectors in many facets of diversity, including women on boards. However, the latest Board Monitor report found that women directors made substantial gains in the tech sector, with women accounting for 40% of the board seats filled in the industry. This is up roughly 13.5 percentage points compared to Heidrick & Struggles' data from 2015.

The HP and HPE boards were formed to govern the two companies that emerged from Hewlett-Packard's split in November 2015.

In 2016, 6.4% of new directors appointed were Hispanic—the highest figure recorded by Board Monitor—up from 4.0% in 2015. While Hispanics continue to be underrepresented in the boardroom relative to their percentage of the U.S. population, the data shows considerable improvement compared to previous reports and represents a 60% increase over 2015.

"We think this increase is due to more boards focusing on inclusion, and an effort to have companies' boardrooms better reflect their customer base and employee population," said Jeff Sanders, vice chairman and co-managing partner of the global CEO & Board Practice.

Some 59% of Hispanic director appointees went to consumer boards, 15% to industrial boards, and 15% to financial services boards. In terms of total appointments by industry, Hispanics assumed almost 12% of available seats in consumer, 6.6% in financial services, 5% in technology, 3.7% in life sciences, 3% in industrial, and zero in business services.

Other key findings of the study include:

For the complete 2017 Heidrick & Struggles Board Monitor report, visit http://www.heidrick.com/Knowledge-Center/Publication/Board-Monitor-2017.